April, 2019, we celebrated the debut of Todd Rundgren’s new guitar which was created by Chris Tatalias, in collaboration with Robert Cue Gerhards and, myself, Noelle Ghnassia Damon. Delivered to Todd at the Utopia Sound Stage in Woodstock, it was immediately taken on The Individualist Tour, and had its debut at The Town Hall in NYC, where Todd was met by enthusiastic fans and rave reviews.

I was commissioned to do the artwork for this guitar by luthier, Robert Cue Gerhards (Gerhards Guitarworks, Windham, NY) for the beautiful guitar fabricated by luthier, Chris Tatalias(Tatalias Guitars, Brookfield, CT). The project was to fulfill Todd’s  request to create a completely unique design. We embarked on a collaborative process: Cue and I explored concepts, patterns, and colors; he created templates for multiple mock ups, and we ran ideas past Chris for his feedback. Meanwhile, Chris made his exquisitely shaped guitar, light as a feather and beautiful to the touch. Cue followed by preparing the guitar with an iridescent base coat which became the canvas for the painting, and upon its completion, he finished the body with layers of  topcoat to provide its superbly smooth finish. The final assembly was done at Chris’s shop, Tatalias Guitars. 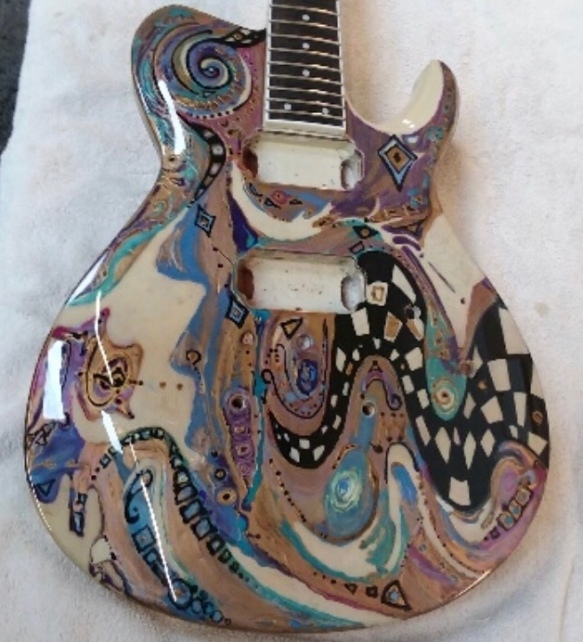 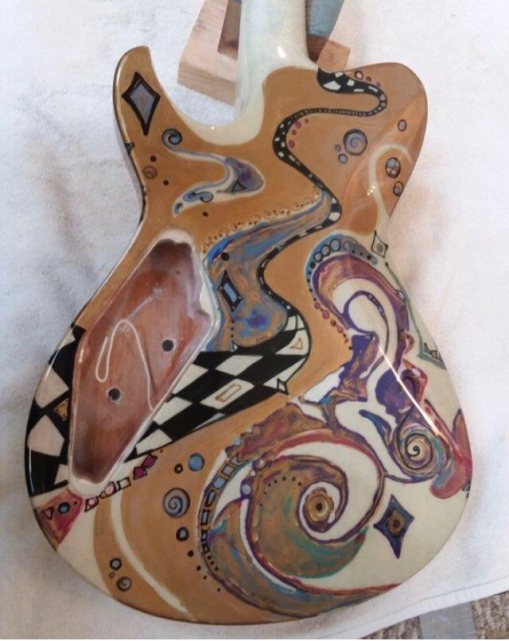 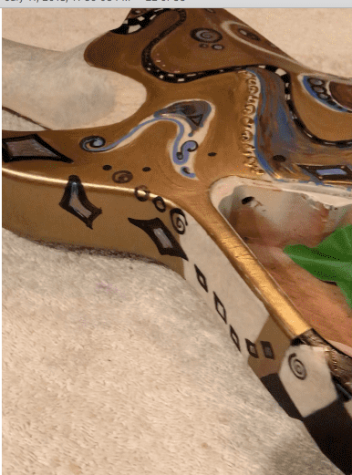 The painting that ensued was an abstract expression influenced by Todd’s overall style as  a rock music icon, and studio wizard who has woven his magic within the industry for the past 52 years.The winding, checkered road is symbolic of Todd himself, the persistent guide paving the path for others, providing sure footing to the musicians he produced along the way. Surrounding him are masses and vortexes symbolizing the changing culture, the changing climate, the clashing and overlapping waves of influence through which he created his unique imprint on the world. On the back of the head stock, is a photo of Todd combined with an image of a white knight, paying homage to the man who has been the rescuer of many and an undaunted champion of the cause to celebrate life through music.

The painting is a combination of colors and patterns at play. It’s a design reflective of estuaries and the flow of frequencies, of circular time intersected by a more linear forms of time and space. The lines swirl and wind through and around each other as they engulf the entire guitar. In much the same way, Todd’s career has been winding and circling back upon itself, revisiting his old favorites, forging new tracks, wrapping  himself around his work, and performing his wizardry.

My great appreciation to Cue and Chris for involving me in this project. And a special thank you to Todd Rundgren, for all he has done for the world through his magical love of music.